Originally released in 1990, Cadaver was a change of direction for the Bitmap Brothers. An isometric puzzle game set in a fantasy medieval world, Cadaver casts you as Karadoc the dwarf who must visit the hundreds of rooms while ascending the five levels of Castle Wulf. Starting in the depths of the castle, Karadoc must solve puzzles, kill assorted enemies, avoid deadly traps and collect the items necessary for his exit from the current level and progress up to the next floor of the castle. The puzzles range from simply taking item A to point B, to disarming booby trapped treasure chests. Completion of the levels is never easy and Cadaver WILL cause you some frustration, but this was never meant to be a game for the impatient or the trigger happy. There are enemy creatures to be killed however, but the emphasis is really on thinking your way through.

The graphics are always gorgeous, from the dark depths of the first floor to the splendour of the Royal living areas of the upper levels. The quality of the visuals doesn't drop for a second and the game is always a treat visually. There is no in game music in Cadaver, but the sound effects are nice and clear and serve their purpose well.

The interface is also very intuitive using a combination of joystick and keyboard. Inventory space is limited but this rarely becomes a problem and if the problem does arise then dropping an item in a room for retrieval later is easily done.

Cadaver is not a game that will suit everyone. If you like your games fast and furious then I suggest you look elsewhere (other Bitmap Brothers games). If however you like a serious mental challenge and have bags of patience, then Cadaver is a hugely enjoyable game that should definitely not be missed. 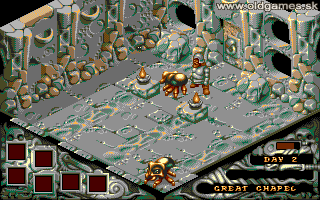 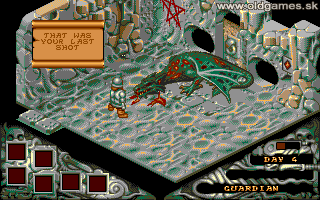 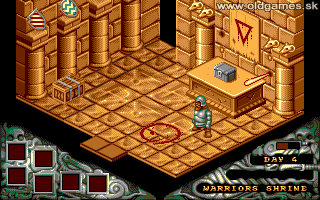 Who likes money? Whatever, I bet you don't like it as much as Karadoc the Dwarf. The villagers living in the shadow of the uninhabited (by humans) Castle Wulf offer him a bumper reward, plus all the treasure he can pick up inside, if he will enter the castle and rid them of the evil mage, Dianos. Only problem is, Dianos is at the end of five levels of monster killing, traps, spell casting and puzzle solving. Still, think of the money!!! You take charge of Karadoc and off you go to the castle. The object of course is to solve the puzzles on each level to open the door to the next level, thus eventually reaching Dianos and, er, killing him.

The levels (which correspond to the floors of the castle; you start off in the caves under it and finally meet Dianos on the battlements) are pretty big and are filled with rooms and chests to explore and monsters to kill. The puzzles, in the main, are fairly straightforward as long as you remember the golden rule: Search everything! Barrels, chests, pillows, armour on the wall - everything! It's usually fairly easy to work out what to do with whatever you manage to pick up - although Cadaver is one of those games that will let you pick just about anything up, regardless of whether or not it can be used to progress. However, scattered throughout, there are a few puzzles that are not very intuitive. On level 5, for example, you have to put a gem into a gemlock but you can only do this if you let the gemlock run down your energy to practically nothing! You'd probably not think of doing that! There are levers in one room which do something a few rooms away and there are levers which need to be toggled a few times.. I guess the thing to do is to experiment, but it would be nice if some of these puzzles were a little more logical.

The game is isometric which makes for some awkward moments negotiating obstacles like pits, spikes, flailers and, of course, monsters. Likewise, trying to kill monsters with stones and shurikens can be a bit hit and miss (literally), although you do get Massacre Spells and the like which are pretty effective! Control is by joystick but there is heavy use of the keyboard to access your backpack, map, different weapons etc. It all seems a bit much at first but when you get used to it it's fine.

The graphics are a little different from the usual Bitmap standard - i.e. they're not metallic! They are the usual Bitmap quality, however, the animation on Karadoc (by the Bitmap's own admission) could be a lot smoother. The sound and effects are maybe a bit weak - limited to footsteps, doors opening etc. and the odd dramatic blast - but in this sort of game you don't need an "Assault on Precinct 13" type soundtrack!

In conclusion, this game will keep you occupied for weeks, if not months. It's a good attempt at an "RPG without the trainspotting element" as the Bitmaps' put it. My main criticisms of it are that there are a few very illogical puzzles. Also, the fact that the game will let you do practically anything to most objects makes for more head-scratching moments than games that 'force' you to only interact with objects in a certain way. That said, it's one of my favourite games ever, on any platform and if you haven't had a look, you really should!

After winning the mighty battle with Dianos and lopping off his head, Karadoc the Dwarf staggers back to Wulfheim, groaning under the weight of all the gold pilfered from Castle Wulf (plus of course, Dianos' head!). Now to collect the reward that the villagers promised him for ridding them of the evil mage.. Unfortunately, Karadoc discovers that most of the villagers have been turned into monsters! Not being the sort of dwarf that gives up on rewards easily, Karadoc sets out across 4 more levels with money (and welshing villagers) on his mind...

The main differences between the first game and this add-on are that TPO has outdoor scenes, the graphics are slightly better and on the first level Karadoc has the help of a friendly monster, Snot (according to Bitmap Steve Kelly!!!). The appearance of Snot is fairly brief unfortunately - his continued presence might have added an extra dimension to the game. Also, the appearance of more magic mushrooms (finish the game! :-) might have added extra fun, although there is still plenty of alcohol for Karadoc to drink scattered throughout! There's a fun drinking game to be played (and Karadoc will die if he loses - hey! they don't play games like that in the pubs I go to!! :-) and there's also a secret quiz room - but no prizes for getting all the questions right.. Pah! One of the better spells to be found is 'Talk to the Dead' which, when cast on a corpse in the mortuary, yields an 'Urgh, what was I drinking last night?' from the deceased. Heh, brilliant!! Beyond all this, the game is more of the same as Cadaver (no bad thing IMHO) and it uses the original games' 'Game' disk, so the animation of Karadoc, interaction with objects and weapons etc are exactly the same as in the first game.

The Pay Off definitely improves on the original game a little, while containing all the monster fighting, puzzle solving, traps and exploring of the original. The puzzles are more logical (IMHO) although there are still a few cases that aren't - off the top of my head, one example is a hole in the wall; you give it some money and it gives you something useful; give it more money and it'll give you something else useful. Then it says (yes, a talking hole in the wall - crazy world, isn't it?) that it doesn't have anything else to give you but you need to keep pumping the money in there until it eventually gives you something *crucial* to completing the level. That's not really what I'd call a puzzle... Again, experimentation and examining everything that looks 'useful' is the key and again, this game will last you a loooong time.

While The Pay Off has improved on Cadaver, I don't think there'll be any converts. If you liked Cadaver, you'll love this; if you hated Cadaver, well, chances are you'll hate this. It's still one of my favourite ever games and apparently it's all written using a special game language - so Bitmaps! It wouldn't take you 5 minutes to hammer out Cadaver 2 would it? :-)

Just to make it clear - you need the original Cadaver 'Game' disk. 'Cadaver : The Pay Off' just replaces the 'Levels' disk.

If you like those medieval fantasy adventure games a la Cadaver, let me point your attention to Core Designs Darkmere. The game design by Mark Jones is very well done and can even match the the Bitmap classic in means of atmosphere and playability.